For The Love of Bacon!

And why not—it’s a fatty, crispy, salty comfort food. All-in-all, it’s a food which doesn’t rate high on the list of, ‘Foods That Are Good For You.’  Still we love it, and have come up with some creative concoctions to further enjoy its tempting flavour.

We dish it out covered in chocolate, drizzled with maple syrup, sprinkled over soups and salads. Most recently I discovered it in an ice cream sundae at a local restaurant. I haven’t tried it yet, but I will. I wasn’t in the mood for ice cream. That’s all. 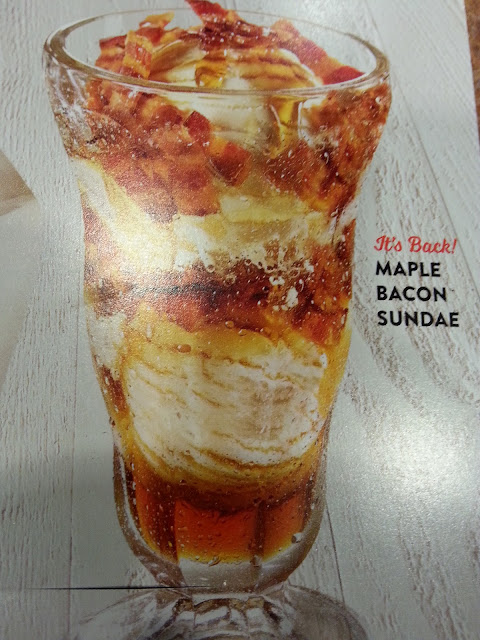 Most people are familiar with the strips of bacon made from pork belly--the kind usually found on breakfast menus. But there’s another Canadian creation called, peameal bacon.

Peameal bacon is made from lean boneless pork loin, trimmed, cured and rolled in cornmeal. It is credited to having been developed in Toronto by a ham and bacon curer. Naturally, where there’s meat, there are sandwiches to be made.

One of the best places to indulge in a peameal bacon sandwich is in St. Lawrence Market in the heart of Toronto. Vendors grill slices of bacon until the centre is slightly rare and the cornmeal coating and fat turns crisp. Then the many slices of pork are layer into a soft bun. You can add toppings to your sandwich, such as lettuce, tomato, pickles and even a fried egg, if you like. I prefer mine, ‘straight’. When dealing with a perfect food, why muck it up with other things?

Arriving at the market just before lunch, my quest was for the perfect peameal bacon sandwich, a treat I hadn’t had in quite a number of years. Yes, years! So, I was determined.

There are several vendors throughout the market offering peameal bacon sandwiches, which are extremely popular with the lunchtime crowd. It’s street-food of the best taste, so lineups can be long.  But, patience is a virtue, or so I’ve been told. I secured my position in the slow-moving line until, finally, I was able to place my order. It was worth waiting for.

My sandwich was exactly as I remembered – warm, soft, crispy around the edges and most of all, tasty, tasty, tasty. St. Lawrence Market and peameal bacon sandwiches go hand-in-hand. But there’s much more to the market.

Consisting of three building, the market hosts a weekly antique market and farmer’s market. A public market has been held in the north building since 1803. The south building houses vendors, daily, selling meats, fish, cheese, vegetable and flowers. There are also bakeries and full-service restaurants to be found here.

For lovers of food, St. Lawrence Market is the place to visit, shop and eat. It’s a cornucopia of all things food. For that reason alone, it remains my favourite Toronto market—it’s a place to go, eat, purchase, bring home, cook and eat some more.

And in case you want to make your own sandwiches at home, yes, you can purchase peameal bacon by the pound. Enjoy!