Toronto’s luxury hotel market has opened up in the last while to include the Shangri-La on University Avenue.  I had been to Momofuku restaurant which is located inside the Shangri-La hotel, but had not actually ventured into the hotel.  So, ahead of the Toronto International Film Festival (TIFF), I change this.

Doors leading to both Momufuku and to the piano lounge in Shangri-La take me inside.  I decide to check out the much talked about Momofuku milk bar which recently opened its doors in the city. I am promptly greeted by a young server who asks, “Are you here for the milk bar?”

“Yes,” I answer rather surprised.  I am not at all certain what makes him believe the milk bar is what I am after. He directs me up the stairs to the second level.

I anxiously climb the long staircase to check out the milk bar. I am excited. I am eager.  I am disappointed.  I did not know what to expect, but it is not what I find, which is a glass encased refrigerator with shelving holding t-shirts, pre-packaged cookies with names like compost and slices of crack pie. Whole crack pies can be had, but alas, no milk.  I expect a milk bar to have, well, milk or at least coffee or tea into which I can pour milk.  I don’t “get” the concept.  Perhaps it’s too sophisticated for me.

Back down the staircase I descend and proceed into the Shangri-La lounge, which, yeah, I do ‘get’.  It is bright, airy and welcoming with the largest double-sided fireplace I have seen.  Even though it is August and 30 Celsius outside, the fireplace is aglow with inviting warmth.  Adding to the relaxed ambiance is a piano player, with fingers gliding over ivory keys performing tunes I do not recognize, but which make me feel melancholy.  I want milk and cookies.

Once seated between Casablanca piano man and the fireplace, I order tea (with milk) and macaroons (I sat right next to a trolley filled with them, so how could I not).  The macaroons come right away, but the tea takes longer than I expect.  When it arrives, I understand why and the waiting is well worth it.  Tea bags are not used.  It is actual tea leaves requiring steeping.  It is luxury.

The server, a young woman wearing a beautiful Japanese style dress, places the richly carved bamboo tray holding the large white and crimson tea pot with matching tea cup, on the table in front of me.

“Well, it’s beautiful.” It is blue and white with a pattern unlike that of a Ming Dynasty vase and it screams elegance.  It hugs her perfectly.

“They were designed by Sunny Fong from Project Runway,” she adds.  Her tone indicates pride in this statement.

She places the tray down on the table in front of me.  A tea sieve is positioned over the tea cup, and she gently pours my cup of tea.  And there is milk.  Not just any milk.  This is frothed hot milk…for my tea.  It is glorious. 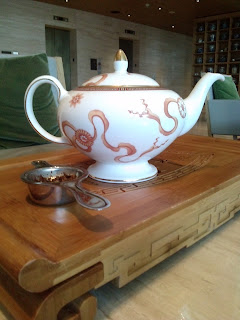 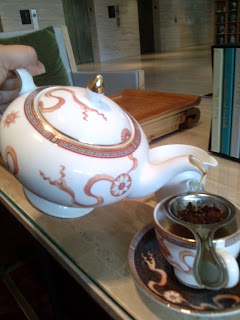 There is something very soothing about having a cup of tea wherever I find myself.  But when I have tea served in an elegant setting, poured from a beautiful tea pot into an equally beautiful tea cup, the moment is elevated to that of delectable pleasure.

And on this particular afternoon, with my imaginary Casablanca piano man playing his melancholy tunes just for me, it is all deliciously delightful.
Written by Unknown No comments: