Last week, I had the pleasure of touring the two Toronto hotels who were awarded the prestigious and sought after Forbes 5-Star rating for 2014.

The Four Seasons is located on Yorkville Ave. in trendy Yorkville, just east of Bay Street. In the winter, things can look dismal and grey, but I imagine driving up to the front door of this property in the summer will be lovely. As you pull in, a 4-story red fountain will greet you, along with a large, colourful rose garden just to your right. The road brickwork, is designed to resemble a Persian rug. It's a grand entryway into a shimmering glass tower, squeezed between Victorian architecture, yet it feels like it belongs. 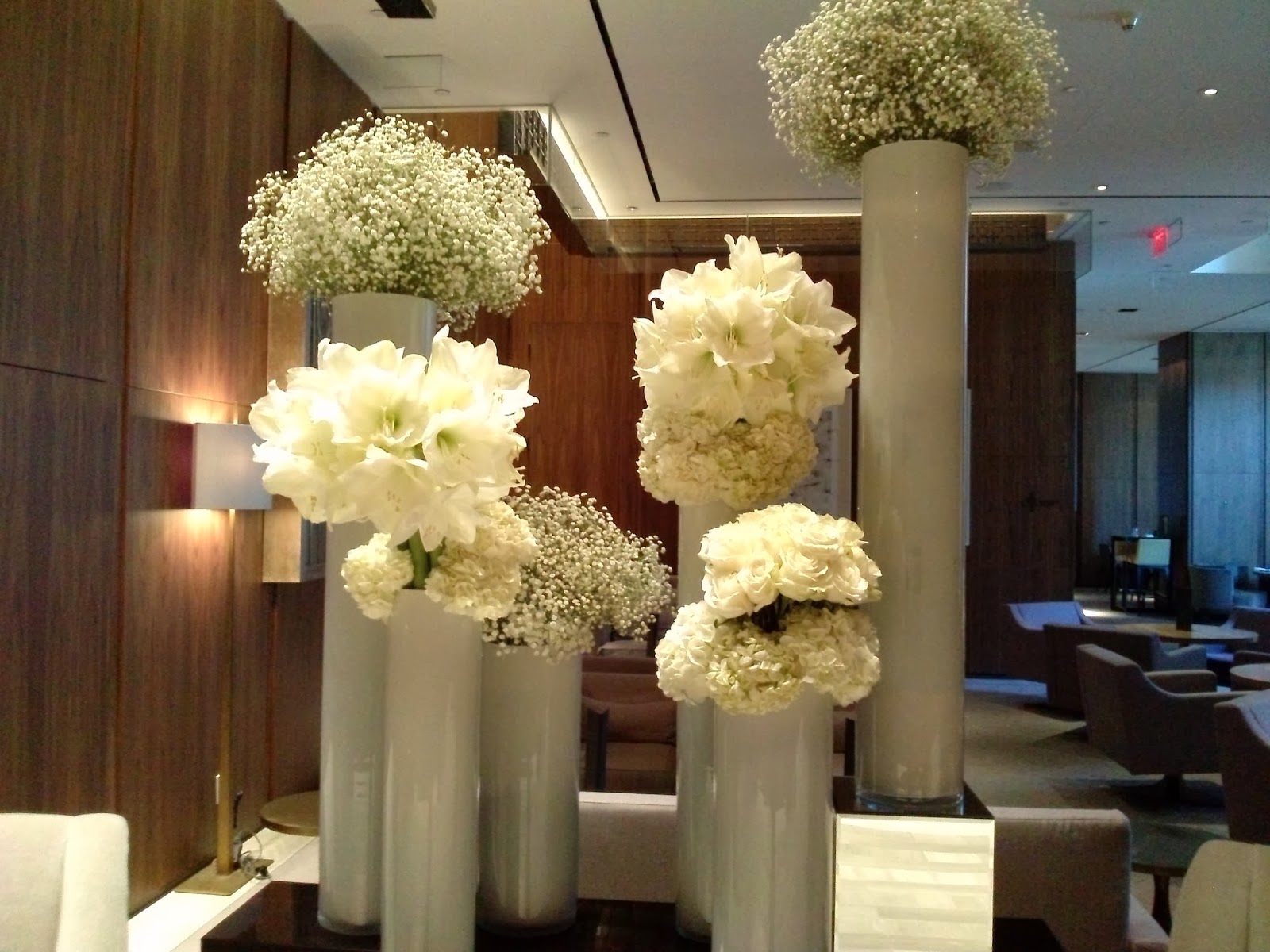 The first view inside the hotel is that of a large sitting area, consisting of several comfortable couches and chairs. Oversized vases hold white lilies, baby’s breath and hydrangeas (this combination is everywhere in the hotel).  There is no check-in desk here. To reach it, you must walk through this entryway, hang a left, then a right. Eventually you arrive at it, but not before you admire the vastness of the soaring ceilings and the grandeur of the artwork. Throughout the hotel 1,700 pieces of artwork, created by 32 Canadian artists can be found. Each piece is exclusive to the Four Seasons.

The Four Seasons was also awarded 5-Diamond status by AAA, making it the only property in Canada to earn the top ranking by two respected organizations. Congratulations Four Seasons.

Next was a visit to Trump International Hotel and Tower, Toronto. Opened in January, 2012, with 261 luxurious rooms and suites, Trump is located in the heart of the financial district. Trump International is glamorous, with its champagne and caviar (light and dark) theme running throughout the property.

“We always try to be unique,” said General Manager, Mickael Damelincourt. I believe this has been achieved. The hotel may be a new structure in an area comprised of many steel and glass towers, but step inside, and it oozes old-style elegance.

A large open-entry foyer awaits. Staff who no longer wear name tags, greet you (the expectation with the removal of names tags, is that staff will introduce themselves to the guests). A large (very large) pink crystal piece of art hangs behind the check-in desk. Black and cream-coloured chairs and couches welcome you to sit and enjoy the surroundings.

Grand, dark-stained staircases take you from one floor to the next. Black chandeliers hang from stark-white ceilings. It’s a throwback to an era when people dressed up for an elegant evening on the town, rather than the wear-jeans-everywhere-crowd so often seen today.

The champagne and caviar theme carries through long corridors leading into each of the rooms and suites, providing a sumptuous experience for those privileged enough to stay here.

Along with the Forbes 5-Star rating, Trump International Hotel and Tower, was also named by Tripadvisor as one of the top 10 hotels in the world, and number ONE in North America. That’s something to be proud of.

All of this, and have I mentioned there's a Chocolate Lab at Trump? Yes there is, producing daily indulgences for guests of the hotel’s Stock Restaurant Bar and Lounge.

In early January, on one of the coldest days of the year (think Polar vortex), I’m walking east on Bloor Street between Avenue Road and Yonge Street. This is Yorkville. The chicest, trendiest, most upscale and most expensive block of real estate in Toronto.

The biting cold stings my eyes, filling them with water and tears flow down my cheeks. By all reasoning, I should be home sipping a hot cup of cocoa with tiny marshmallows floating on top, while watching the fireplace channel. But this is Canada. I am Canadian and what is minus 45 Celsius! I trudge onwards.

Bloor Street is a major city artery. Cars crawl slowly along. Drivers honk impatiently. Pedestrians dodge cyclists, automobiles and each other, as they weave their way in and out of Holt Renfrew, Prada, Hermes and Gucci. It’s just another busy street in a busy city.


But a walk one block north of Bloor Street to Cumberland Street transports me to an era of long ago. The Victorian row houses lining the road add to the feel. People walk slower along this street. They appear less hurried.  They’re smiling more, and no wonder. It feels like a small village where everyone may just know each other.


Yorkville has a wonderful and colourful history. Founded in 1830, the Village of Yorkville was a residential suburb with two main industries—the Yorkville Brick Markets and beer making.  For years, it flourished as such.

By the 1960s, Yorkville was a run down, shabby part of the city, but it was thriving. This was the season of love, Aquarius and flower children and they needed a home.  Yorkville became Canada’s hippie capital, and a bohemian culture erupted around the area. Coffee houses, clubs and art galleries lined its streets. By the late 1960s there were over 40 coffee houses and clubs. Folk music was out and folk-rock and psychedelic rock was in. Musicians like Joni Mitchell, Gordon Lightfoot, Neil Young and Carly Simon, to name just a few, cut their music teeth in Yorkville clubs. It’s here that Buffy Saint-Marie wrote her anti-Vietnam song, “Universal Soldier”.

The most famous of the Yorkville clubs was the Riverboat Coffeehouse. Here, 120 people could be seated comfortably. Each seat was close enough to the stage to provide an intimate experience with musicians like Simon and Garfunkel, Seals and Crofts, Arlo Guthrie and James Taylor. The Riverboat is where Joni Mitchell first performed her famous song, From Both Sides Now.  The rich music history of the 1960s Yorkville clubs and coffee houses, continues to be celebrated today.

In the 1970s, Yorkville experienced another re-birth. Millions of dollars were spent, giving way to upscale restaurants and shops. The 1980s brought condominium developments, and with it an increase in residential population.  In 1993 the Village of Yorkville Park was installed in an area where a parking lot once stood. Today, Yorkville is the place to be and be seen, attracting locals, tourists and movie stars alike.


My personal-favourite Yorkville moment, happened on a hot summer evening in a restaurant now long gone. I was enjoying a large  vanilla ice cream served in a crunchy vanilla wafer cone, when three members of The Beach Boys--Mike Love, Al Jardine and Carl Wilson (Brian Wilson was still in bed), strolled in for their evening meal.  All were gracious enough to sign the ticket stub I held for the performance they had wrapped up just an hour beforehand.