Top Five Things To Do In Toronto This Summer

If you find yourself in Toronto thinking, hmmm, nothing to do, well, you’re not in Toronto.

Maybe you are on the outskirts of the city, like in Vaughan or Burlington or Ajax. Or perhaps you land at Toronto Pearson airport (which is not even in Toronto), and for inexplicable reasons, you never leave. Whichever the case, you are most certainly not in Toronto because if you were, you’d never utter the words, “nothing to do.”

If you can only do five things in Toronto this summer, here are my suggestions:

5. Take a walk on the EdgeWalk

This is as high as you’re going to get in Toronto (without any substance abuse). EdgeWalk is the first of its kind in North America. It is the world’s highest full circle hands-free walk on a 5 ft (1.5 meter) wide ledge encircling the top of the CN Tower’s main pod. It is 116 storeys above the ground. Visitors walk in groups of six, while attached to an overhead safety rail via a trolley and harness system. Trained EdgeWalk guides encourage participants to push their personal limits, allowing them to lean back over Toronto with nothing but air and breathtaking views of Lake Ontario beneath them.

Edgewalk is open seasonally and operates in all weather, with the exception of electrical storms, high winds and other extreme weather conditions.

The Toronto Festival of Beer, also known as Beerfest, is an annual event that takes place this year from July 24-26 at Exhibition Place in Toronto. The festival celebrates Canada’s rich brewing history by featuring more than 120 brands from around the world as well as many Ontario craft brewers. The event has become Canada’s largest beer festival with 30,000 people attending every year. Established in 1994, the Toronto Festival of Beer has been sampling beer for those aged 19+ for 17 years.

3. Taste of the Danforth


After all that beer sampling, you’re going to need some food. Every year in August, the city of Toronto flocks to Greektown on the Danforth for Krinos Taste of the Danforth. There are a number of exhibitors offering contests, prizes and free samples and, of course, dozens and dozens of tasty food stations from Danforth’s amazing array of multi-ethnic restaurants. This year’s foodie-fest runs from August 7th to 9th.

This is 4 days and 4 nights of non-stop, action-packed, fun-filled entertainment. This is where comedians, contortionists, musicians, magicians, fire jugglers, acrobats, aerial artists, clowns and daredevils all come together for North America’s largest street performer festival. This event is also the largest epilepsy awareness event in the world hosted on the world’s longest, most vibrant street (Yonge Street). Admission is by donation in support of Epilepsy Toronto. Buskerfest runs August 27th to 30th. 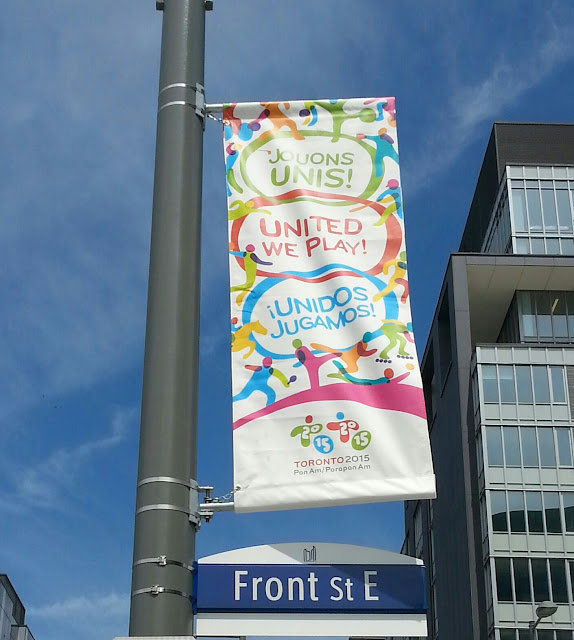 This is the mother lode of all events in  Toronto this year. Athletes from 41 nations across the Americas will participate. The Pan Am Games may be the world’s third largest international multi-sport games, but they are the single largest such event that Canada has ever hosted—bigger than the winter Olympics in Whistler, BC.
The games are officially known as, Toronto 2015, but competition venues are scattered throughout southern Ontario, with cycling in Milton, kayaking in Halliburton, soccer in Hamilton, for example.
Much has happened in preparation for these games. Built on what was once wasteland, a well-planned and well-designed village is waiting for the athletes. A long-awaited commuter train now connects the airport to the city-centre (halleluha!)
Thousands of people are involved in ensuring the Toronto 2015 games are spectacular, including 23,000 volunteers, of which I am one of them. I’ll be working with team Bahamas (Go Bahamas) during PanAm and team Mexico during Parapan (Vamos Mexico). I can't wait for it all to begin. Bring it on!
The Pan Am games are from July 10th to 26th. Parapan Am games are August 7th to August 15th.

The games are coming, and I can't wait.

What will you be doing this summer?
Written by Unknown 1 comment: