On A Roll At Le Cordon Bleu

“Better to have a small piece of something made properly than a large piece of something, so-so.” Those were the words of Chef Cristiana Solinas, the quick-humoured, energetic and passionate Pastry Chef Instructor. With her Italian accent, everything she said sounded very profound. 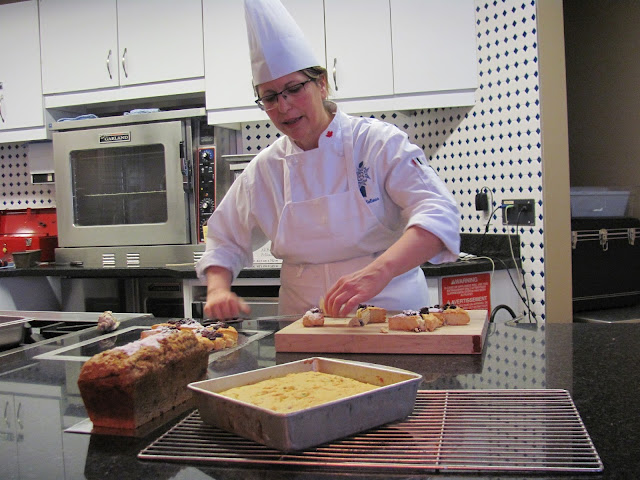 “Food is so personal,” she added. Indeed and personally, I just love food.

So it was with my love for food, good food, that I signed up for the Quick Breads short-course at the world renowned, Le Cordon Bleu. Luckily, I didn’t have to fly to Paris. Rather, I drove east from Toronto along the little stretch of highway we call, The-Four-Oh-One, and hung a left just past Kingston in to Ottawa, where Canada’s very own Le Cordon Bleu campus is found. 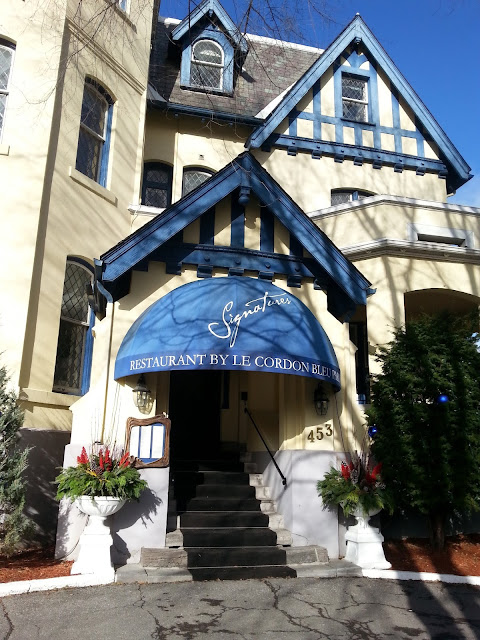 Along with offering diplomas in areas like, Cuisine, Pastry and Confectionary, the school also offers short courses for the foodies in all of us, and for those who have recently retired and are trying to answer the question, what the heck do I do now? Such were the majority of my fellow students. To be fair, there were also young people in attendance. Most were accompanying a parent who had recently retired. I was there, because you know, I love food! 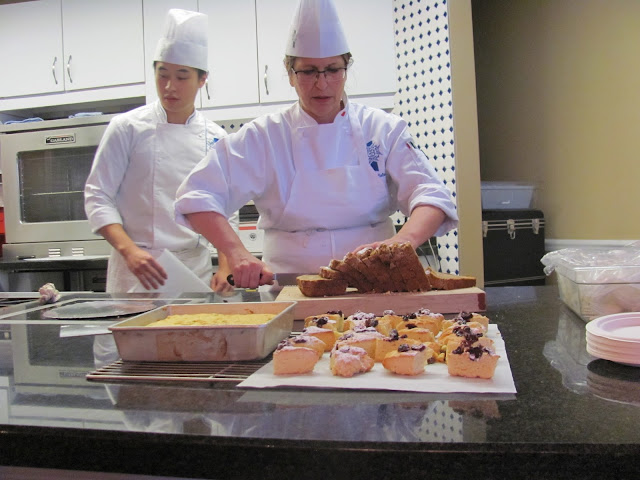 The short courses offered for the gourmet enthusiast, range anywhere from 2 hours to 4 days, depending on whether it’s a demonstration or a more intense course, like Wedding Cakes (4 days). The selection of courses is pretty outstanding – everything from Knife Skills (2 hour demo) to Julia Child’s Classics (4 hours). With the 4 hour courses, students are advised to bring their own containers to take their creations home.

The afternoon started with a demonstration in Salle Cointreau, a fully-equipped kitchen with large television screens for easier viewing of Chef Solinas' creations. Assisting her were three students from the Basic Pastry program. While the Chef provided instruction and demonstrated the proper way to flambé bananas without setting the kitchen on fire, her assistants were at the ready with bread pans and baking sheets, along with keeping a close eye on what was baking in the oven.

A notebook with recipe ingredients was provided, but not the directions. It was up to each student to observe and make notes to allow for the recreation of the recipe.

Once the demonstration, which included sampling all baked goods, was over, students were escorted to the Practical Kitchen. Everyone had a personal workstation waiting. All the required ingredients had been pre-measured and were sealed in plastic containers. There were also utensils, a tea-towel, an apron and of course, a Chef’s hat. Placing the hat on my head, I immediately felt like I knew what I was doing. It was false confidence. 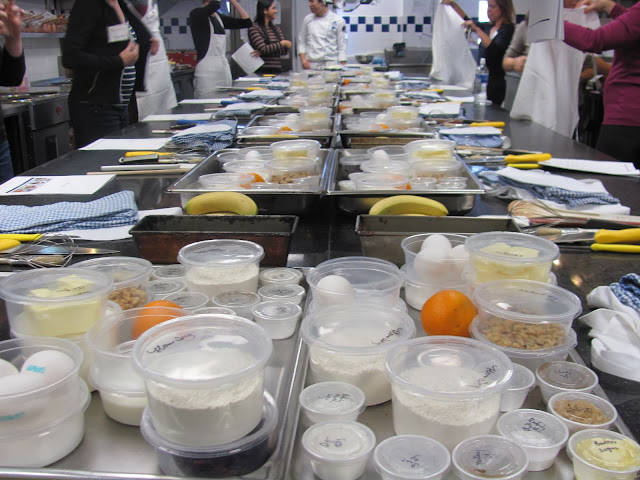 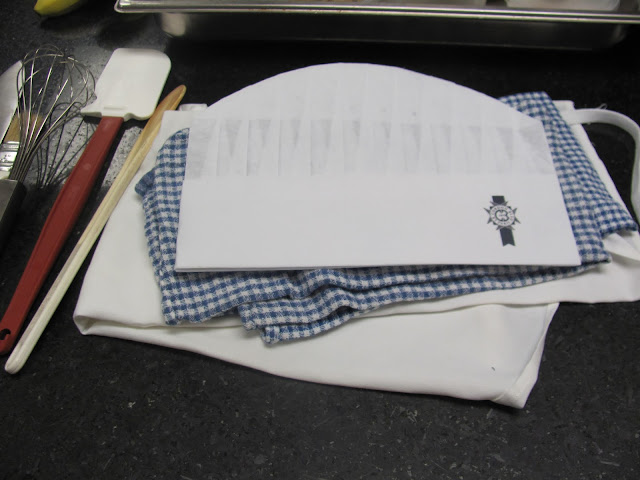 The demonstration by Chef Solinas had included Jalapeno and Bacon Cornbread, Orange and Cranberry Scones and Flambé Banana Bread. Our allotted baking time allowed for the baking of scones and banana bread only. And so we began.

Flambé Banana Bread was the first recipe. I had made my notes. The ingredients were all in front of me. I poured. I mixed. I flambéed. I was wearing my Chef’s hat! 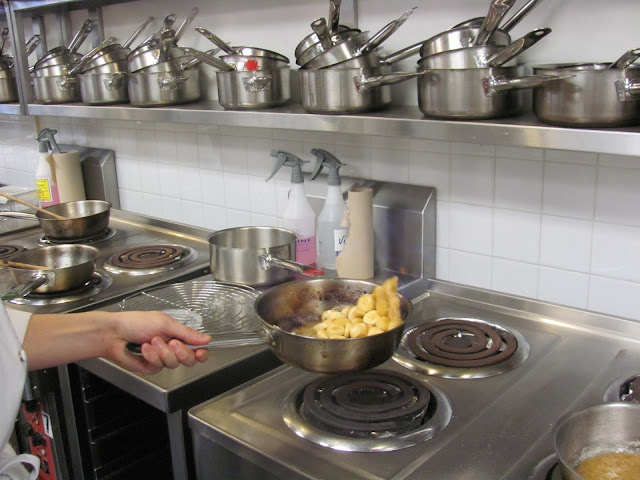 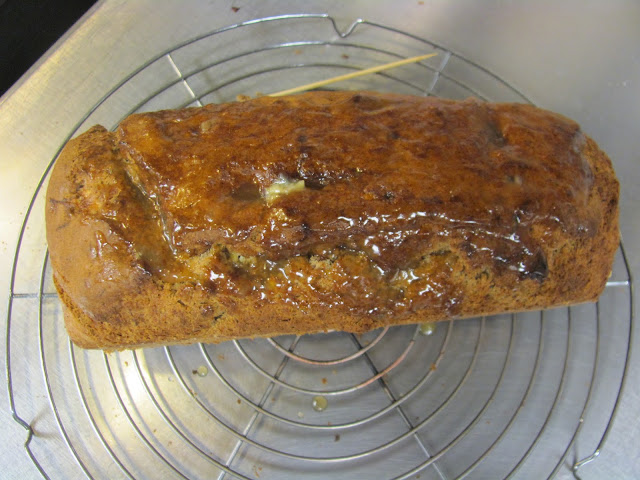 With the banana bread in the oven, I began the Orange and Cranberry Scones. This recipe was a little trickier. It required kneading, a task which I clearly lack skill. At various intervals, an assistant stopped at my station to provide me with one-on-one instruction on proper kneading technique. Chef Solinas also offered direction. It was of no use. I didn’t master kneading. Undeterred, I pressed on. I was still wearing my Chef’s hat.

I used my rolling pin to roll my dough to scone-appropriate thickness. I cut the dough into squares, pressed cranberries onto the top of each square, reviewed the recipe, re-read my scribbly notes. It all seemed perfect. I was done. My scones looked rather perfect, I thought. I pulled down the oven door and gingerly slid my scone-filled tray into the oven. I turned my attention back to my workstation. Yeee Gaads!! I had left one ingredient out—baking soda.

Chef Solinas had spent time explaining the difference between baking powder and baking soda, although at that moment I wasn’t quite sure which did what. I did  know that my scones were destined to be flat squares of dough, prettied-up with cranberries.

“Consider it an experiment,” stated my fellow student, when I told her what I had left out.

In the end, it didn’t matter. I came away with a container filled with baked goods, which I had made in my 4 hours spent in the world’s leading culinary school.

If it was good enough for Julia Child…. 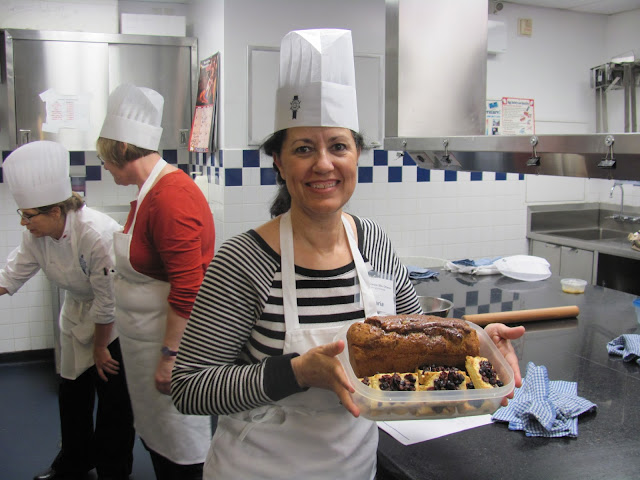