Lisbon surprised me. I rented an apartment in the city for a three week holiday, in the neighbourood of Mouraria, which it turns out, is a ‘seedier” part of Lisbon.  Had I been privy to this nugget of information, I might not have leased this particular space.  I am happy I did not know, as I would have missed out on much.

Mouraria is an ancient neighbourhood with stone-paved alleys and staircases, leading up hills which eventually land you at what was once the Moorish royal palace, known today as St. George’s Castle. The castle, with its turrets and wind-blown flags is my beacon and my constant marker in this city of seven hills.  All roads lead back to Mouraria, a multi-cultural area, filled with Chinese bric-à-brac shops, Indian tandoori restaurants, Portuguese cafés, and the constant beats of Brazilian and African music.

Women in black tunics and hijab.  I spotted a woman rounding a corner wearing a long black skirt, black headwear and a black shawl.  I concluded she was a Muslim woman.  I was wrong.  She was in fact, a Portuguese gypsy woman wearing her traditional attire.

I fully see the connection now. The Moors ruled Portugal for centuries. The Moors were Muslim, and their influence remains to this day.   There are trains stops in the area with names like Alcantara, Alverca and Alhandra to name a few, with clear traces to the Moors and the Arabic language. 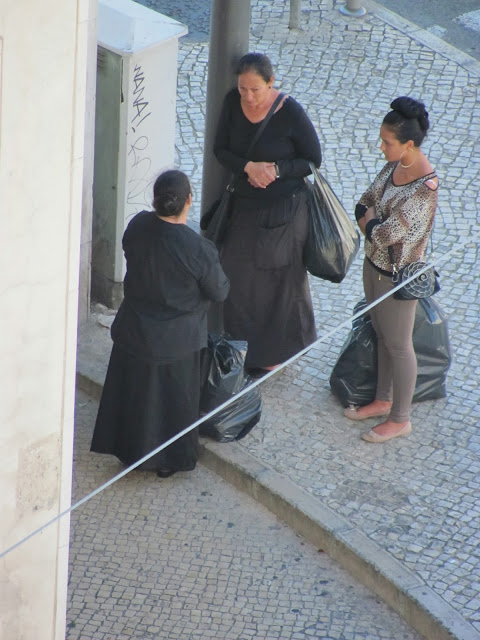 This is a neighbourhood of lively colourful characters. Each morning, a woman dressed in a coat tattered by years of wear, arrives at the square across from my apartment.  She begins shouting things I cannot make out. In her right hand she hold a cup for donations. Local grocers give her food to move her along.

Then, there is the well-dressed much older woman, inhaling long puffs of smoke from the cigarette she holds between yellow stained fingers. She carries an umbrella in one hand and a purse in the other. With her brightly painted ruby coloured cheeks, she too arrives in the early morning. She rests her body against a wrought iron pole for hours. Occasionally, she will speak to someone, but not often. She just stands. Watching. Lingering. Inhaling.

And what is a city without its hookers, pimps and drug dealers? All happily going about their business at 3 am.  There is no traffic at that hour, so they wonder the streets, singing no less, which is how I know about this business, as their singing wakes me up. Who knew hookers, johns, and pimps could sing harmony together?

The world in all its colours, languages and faiths is truly outside my door in Mouraria. All living side by side in peace, in their new adopted country.  This is a side of Portugal I did not know existed, and one I am happy to have discovered. 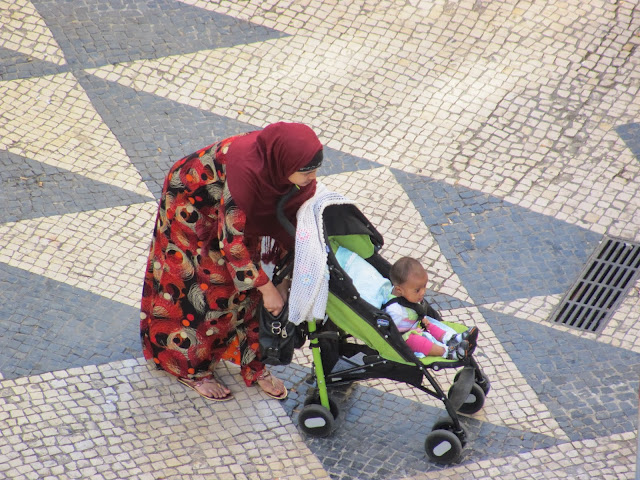 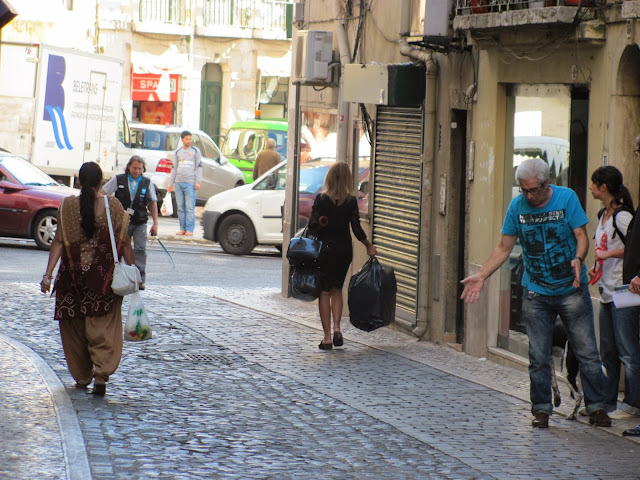