My Year Of Firsts

The start of a new year gives way to reflecting on the old, and frankly, I had a hell of a year! 2016 was a year of many "firsts" for me, including, taking the car in for service, attending a theatre production alone and cooking for one.

In late 2015 my life took a turn. I became a widow, a title I despise by the way, mostly because of the reaction I receive -- mostly from customer service personnel.

This is usually followed by a stare from someone whose face goes from smiley to frown, faster than a Chevy at an Indy car race. It’s a look that says to me, this wasn’t covered in my customer service training.

So just how did I manage my first year of widowhood? Frankly, a lot of it is a blur right now. One day blended into the next, until 365 days had passed and presto, before I realized it, a whole year was done.

I do recall travelling in 2016, each trip a step forward in my personal grief journey. My husband, David, was an avid traveler. Prior to our meeting he had already covered a great deal of the world. I, on the other hand, had barely driven out of the Greater Toronto Area. When we were raising children, our trips remained close to home. Once our children were gone, we ventured out. I had some catching up to do, after all.

With my travel companion gone, the question became: do I stop travelling because I no longer have a partner to travel with, or do I go on my own? The answer was pretty clear to me. Off I went.

My first trip in 2016 was a mere three months after David’s death. I chose a cruise. I knew it would be a difficult trip for many reasons. The obvious ones were:
Cruising had been our favourite type of vacation;
It’s mostly couples you find on a cruise ship;
I booked myself on the sister-ship to the last one David and I had sailed on.

Still, I felt a cruise was a ‘safe’ option for a first trip. I knew what to expect. There would be no language barriers, all meals would be taken care of, I was familiar with the lay of the ship.

Did I have a great time? Contrary to what the photos might suggest, no.

I had a miserable time, spent mostly in my inside cabin, which was smaller than today's modern walk-in closets. But the single-supplement (another first) was 100% and I wasn't prepared to pay the amount required for anything grander than a closet.

At the end of my 7-day Caribbean cruise, the only thing I returned home with was the satisfaction I had done it. I had pulled up my big-girl pants and taken my first trip since widowhood was bestowed upon me. All on my own. That may not sound like a big deal to many, but to me, it was an accomplishment.

In May, I set off to Halifax, Nova Scotia to visit my friend, Elaine, who herself had become a widow two years earlier. Together we shared old memories, laughed and cried. But that’s how it is with us widows, laughter and tears are intermingled and flow easily from one to the other. Life moves on and you either shut the door on it, or choose to live it. Elaine and I choose the latter.

We visited museums, set off on coastal drives, visited old friends and made new memories. That’s the joy of living.


In August, I was off to Granada with another girlfriend. I stress the girlfriend bit, because she is a friend who happens to be a girl, and because we stayed at Sandals Resorts.


If you know anything about Sandals, you’ll know it’s a ‘couples only’ resort and we’re not that sort of ‘couple’ (not that there’s anything wrong with it).

Ingrid and I had great fun going along with the assumptions made when two women are seen clinking glasses during dinner, entering the  king-size-bed-furnished room, or merely strolling along the beach together.


One evening during dinner, when asked by a (heterosexual) couple on their honeymoon, what had brought us to Sandals, Ingrid answered, “It’s our anniversary.”

On yet another evening, as we walked through pathways lined with flickering candles and gently swaying palm trees (very romantic), I was complaining about how the photographer in the dining room had taken a photo of every couple, except us.

“But we don’t care to have photos taken,” said Ingrid.
“Yes, but I want to be asked,” I said.
As we continued this banter, another photographer, who perhaps had overheard our comments, crossed our path.
“Would you like your photo taken?” she asked.
“Yes,” we answered in unison.

We didn’t buy any of the photos, so I can’t show you the grin on our faces as we posed for the lens with arms wrapped around each other, like the amorous couple we are not.

My final trip of 2016 came in November when I visited the Azores, nine Portuguese autonomous islands in the north Atlantic. I spent three weeks exploring, meeting new people, eating and reflecting.

My first week was spent in Graciosa, the second smallest island in the chain and the island I was born in. I stayed with an aunt and uncle who live in Toronto but return every year. Together we drove multiple times around the island (it’s really small), taking in the pounding surf, the green hills and pastures dotted with herds of cows. 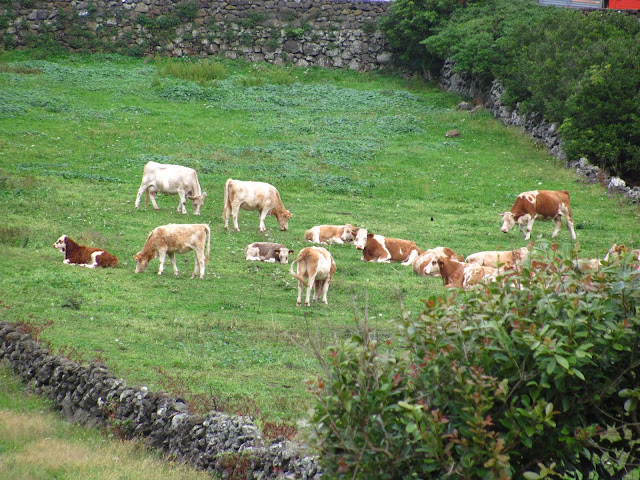 The last two weeks of my Azorean adventure were spent on my own, flying and taking ferries between five other islands. I rented a car in each island, planned a route and hit the road. Along the way I met some wonderful people, took in breathtaking landscapes, ate foods I can't get in Canada.

I engaged in conversation often, with as many people as I could have, yet it was not enough to shake the loneliness I often felt.  Still, the experience did not deter me from dreaming of future trips.

After each trip, I heard comments like:
Wow, that must have been fun. Really?
I’m so jealous. Really?
I wish I could travel like you. Really?

But the one comment that stands out the most is this one: You’re so brave. I could never travel alone.

To that one I ask: what’s my option? Not to travel?
That is not an option for me.

So I welcome 2017 with an open heart and optimism for a future filled with warm memories, laughter, love, and lots more travel.