Halifax is a foodie’s delight, especially if your taste buds include seafood. With the Atlantic Ocean lapping at its doorstep, fresh fish, lobster, mussels, oysters, scallops (think Digby) abound. If you’re more of a ‘meat and potatoes’ person, no problem!

Let’s start with the seafood:

Question: What do the King of Siam, the Titanic and the Halifax explosion all have in common?

I was anxious to dine at Five Fishermen, not simply because of its menu, but also because of the history behind the building in which the restaurant is housed.

Located in a historical part of Halifax, it was constructed as a schoolhouse in 1817. When Dalhousie College took over the school, the Halifax Victorian School of Art, established by Anna Leonowens, occupied the space. Prior to opening the art school, Anna was the governess to the King of Siam’s children. She wrote a book and the rest, as they say, is history. The art school eventually moved, at which time the building was turned into a mortuary. During its stint as a funeral home, it accommodated hundreds of bodies after two major disasters: the sinking of the Titanic and the Halifax explosion.

Fast forward a good number of years, and presto, we have the Five Fishermen restaurant, which is consistently recognized as one of Halifax’s best dining experiences.

My Haligonian hostess and friend, Elaine, and I were immediately struck by the large stain-glass windows on the second floor. Lucky for us, our table was right next to a bank of such windows. It only got better from there.

Our dining experience began with appetizers. We ordered mussels in a creamy garlic sauce along with crab and scallop cakes. The mussels arrived speckled with bits of finely-chopped garlic and onion. They swam in a creamy-white sauce, which was so darn tasty, had there been a spoon available I would have slurped it up like soup. Perhaps a little uncouth, but so what?

The crab and scallop cakes were crispy on the outside and moist on the inside. They tasted as you’d expect a crab cake to taste. I didn’t find the scallops heightened the flavours. What was different, and very good, was the sauce accompanying them – a vibrant orange-coloured sauce with a hint of heat that built up in your mouth, rather than hit you square in the pallet with an explosion of fire. I learned later it’s made with kimchi.

For our main, Elaine and I chose the same dish – The Five Fish, and no wonder. It’s sautéed colossal shrimp, Digby scallops, pan seared local halibut and salmon served over lobster asparagus risotto. For good measure, we each ordered a lobster tail! Oh my! 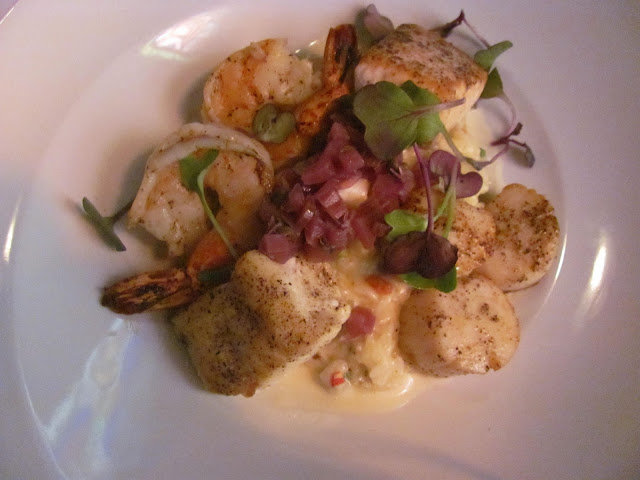 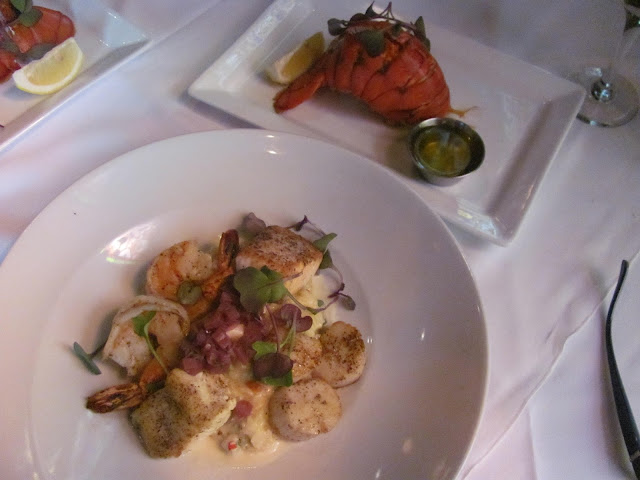 Next question: How do you know you’re in a truly fine-dining restaurant?

Answer: The Caesar salad is made table-side.

This is exactly what you get at CUT Steakhouse (5210 Salter Street; 902-429-5120) -- order a Caesar salad, and a server in a crisp black and white uniform, wheels a cart to your table with all the 'fixings' on it. The egg is cracked into the large wooden bowl, the olive oil is poured just so, and on it goes, until your salad is done. It’s a practice long abandoned. Needless to say, it was a very pleasant surprise to witness this culinary performed treat right in front of me.
When it’s time to choose your steak, another cart is brought to your table. An explanation of each cut is offered. It’s a learning opportunity. For example, I learned that corn-feed adds marbling; grass-feed, results in less marbling. Maybe this is basic steak-knowledge, but I didn’t know.

Chef Luis Clavel, who has developed quite a reputation around this part of the country, thanks to his creativity and approach to food, had a few surprises stuffed into his chef’s apron for Elaine and me.

A white tagine was brought to our table. Lifting the lid revealed, among other things, two little towers of roasted corn and sliced octopus. When Elaine said, “The octopus is so tender,” we were told it had been cooked using the sous vide style of cooking.  I wrote the term down and made a note to Google it, not knowing a few hours later, Chef Clavel, would show us what it is.

Between the grilled-shrimp appetizer and the main course, a palate cleanser was presented by the Chef himself. In a clear-glass serving dish was a mound of flavoured ice crystals. A cream-coloured ball, about the size of a quarter, sat on top. Chef Clavel poured a liquid over it all, then asked us to bite into the ball. We did as instructed. It was an explosion of sweet effervescent liquid -- a white chocolate ball filled with Prosecco.  A surprise of the best kind!

Then came our steak and its accompaniments. All perfect!

Elaine and I sat, ate, talked, ate, talked … for well over three hours. We were in no rush and no one seemed in a rush to get us out. At the end of our meal, Chef Clavel awaited our arrival in the kitchen to show us what sous vide is. He was cooking up lamb in a hot water bath.

Just when we thought we were done with food for the night, two small paper bags were handed to us, each containing a tiny banana bread loaf. Breakfast baby!

East of Grafton had not yet opened when I visited Halifax, and obviously, is on my list for next time.